On a roll - Where to skate with kids

In Newy, we love to ride, scoot and skate; that’s how we roll.

With free outdoor skate parks, cycle and walkways and the vast National Park netball courts, there’s something for however you roll.

Could this skate park not only be one of Australia’s best but offer one of the best backdrops?

We think so and so does Poppy Olsen who says the park’s ‘gold bowl’ - a 2.1m and 3.3m bowl finished with pool coping - is possibly her favourite in the world.

Sitting opposite the rolling waves of Bar Beach, several major skate competitions have been held here while some of Newcastle’s best skaters have honed their skills here (and still do).

“It flows really well, everything kind of works and it’s not too hard to figure out lines in the bowl and get up speed. It’s a fun and mellow place to learn stuff too.” Olsen says.

If you’re not quite up to dropping in, or there’s a session on with more experienced skaters, kids can have fun on banked wall, stairs with hubba ledges and a flat bank with rail.

Olsen’s tip: Go early in the morning when the older, more experienced skaters aren’t around. 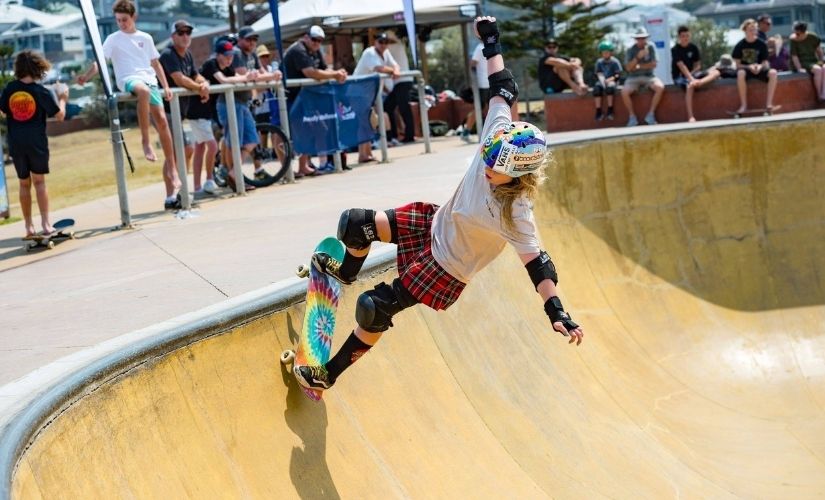 Taking inspiration from the docks, the 40m skate plaza incorporates long lines, steel sculptural features and the remnants of gantry infrastructure. Running alongside the skate park is a playground with sandpits, flying foxes and plenty of shade.

Olsen said while there are lots of obstacles which are tricky for beginners there are also mellow little banks and ramps including a knee ramp to learn on.

Olsen’s tip: Avoid the weekend crowds by visiting midweek as this compact park can get crowded.

Catch the Newcastle ferry over from Queens Wharf for a fun day out.

If your kids are learning to skate, ride a bike or anything else on wheels, head for these netball courts to practice on a flat, hard surface.

Comprising of 30 hard surfaced courts located in the southern part of National Park, it’s a popular spot for kids to learn.

*Netball season typically runs from March through to the end of August so steer clear of the courts when games are on.

This scenic section of the Bathers Way offers a fun, wide and smooth pathway for kids to scoot, skate and roll. Start at Newcastle Baths and skate north to Nobbys Beach, or vice versa.

You’ll have ocean one side; Fort Scratchley above and Nobbys Lighthouse in the distance. The distance is only around 650-700m long so double back to make the run a bit longer.

Keep an eye out for pelicans, dolphins and remember to keep left as this is a shared pathway.

This small concrete park with open round bowl at one end is located in Dangar Park.

There are angled ramps, quarter pipes, banks and rails. The park is popular with skaters and kids on scooters.

Afterwards head for Equium Social nearby for a coffee.

Keep an eye out for the unveiling of this $10-million-plus state-of-the art skate park currently under construction in a show-stopping location along the Bathers Way. 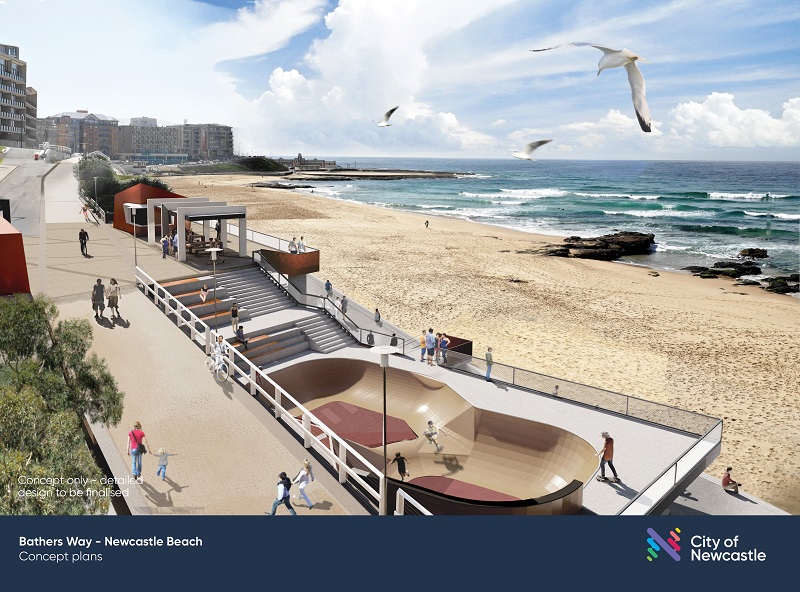 Expect an accessible skate park, kiosk and more built on the footprint of the old skate park at the southern end of Newcastle Beach.

“It looks like it’s going to be lots of fun and in such a great location too,” Olsen enthused.

See all the Newcastle skate parks

How to ride safely

It's a dogs life

48 hours in Newcastle for families

Up next Meet Ben from Newy Rides