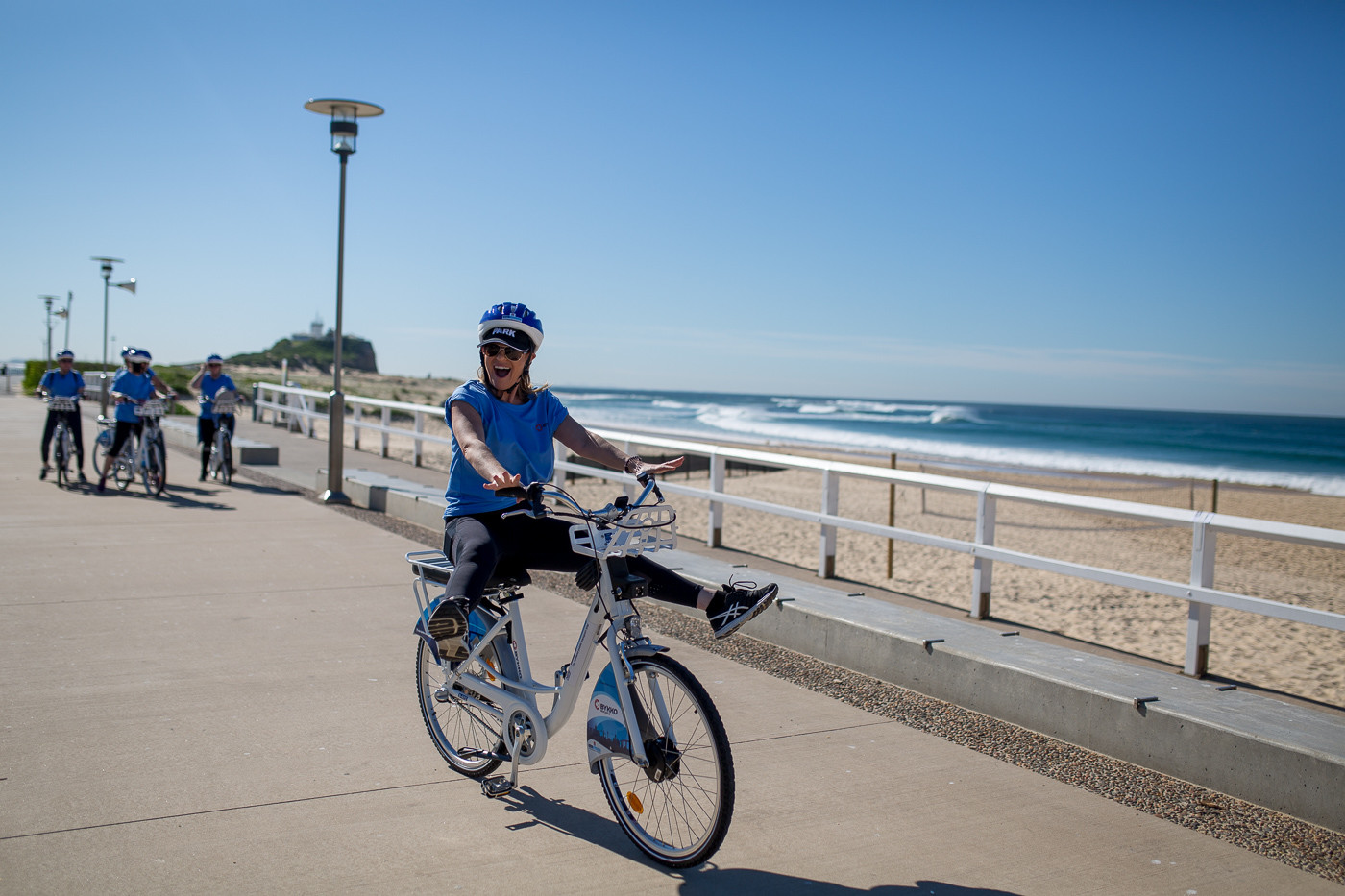 Could there be a better way to explore Newcastle’s coastline and working harbour than on two wheels? Get out and amongst it – salty breeze on your face, wind in your hair and dolphins cavorting in the rolling waves.

No bike? Fear not. Newcastle’s electric bike share, BYKKO, makes it a cinch to explore three of Newcastle’s most scenic e-cycling routes. Lycra optional, helmets not.

From there make the climb to Newcastle’s magnificent King Edward Park (you’re on an electric bike so it’ll be easy). At Strzelecki Lookout stop and take a stroll along the magnificent clifftop Anzac Memorial Walk (bikes not permitted) with its 360-degree vistas of Newcastle’s coastline to the Hunter Valley beyond.

Loop back and coast down to Bar Beach and up and over to Merewether, home turf of former Silverchair front man Daniel Johns, four-time surfing world champion Mark Richards and Surfest. Reward yourself with a swim or a well-earned cold ale before making the return ride. You can also do a longer ride via Cooks Hill, the Junction and Hamilton.

Spot sunbaking seals, Newcastle’s iconic lighthouse and shipwrecks on this coastal ride known as the ‘Breakwall to breakwall’.

Coast out along Newcastle Breakwall with Nobby’s Light House looming above, keeping an eye out for seals on the rocks below. Loop back and follow the harbour with its flotilla of boats, winding your way through Honeysuckle, Maryville and on to the gritty inner-city suburb of Carrington.

From there return to Queens Wharf and make the short dash across Newcastle Harbour on the Stockton Ferry (bikes travel free; passengers need an Opal Card) which runs every 15-20 minutes. From Stockton cycle along the Hunter River to Nelson Bay Rd before circling back to Stockton Break Wall. Keep an eye out for the wreck of the Adolphe, which came to grief in 1904. The remains of several shipwrecks were incorporated into the break wall during construction and is now known as Shipwreck Walk.

With 19 bike hire stations throughout the Newcastle CBD, Honeysuckle, Newcastle West, Wickham, The Junction and Bar Beach, finding a bike and getting to your meeting, lunch date or next nightspot has never been easier.

Cycling is an excellent way to get around, save money, keep fit and reduce your impact on the environment. A bike trip of less than 5km can be even quicker than taking the car. Many of the key attraction in Newcastle are within a short bike trip of each other.

Experts in guided bike tours, Pineapple Pedals will awaken your inner child by riding vintage retro bikes through the streets Newcastle. Plus you don't need to be a professional cyclist, the rides are easy! Up next Peninsula City